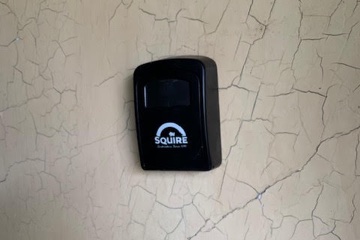 We wanted to share an experience that our Managing Director Andy had recently to highlight the benefits of our key holding and alarm response services. He responded to an alert in the early hours of the morning at one of the properties we hold keys for as a single intruder alarm had been activated there. Andy attended the property quickly and identified the room in which the activation had occurred.

Although there were no signs of intrusion, the room in which the alarm had been activated had filled with condensation and a leak was visible coming from the ceiling. Andy went upstairs where he identified a dripping tap which had not been fully turned off in the bathroom above. He turned the tap off and soaked up the water on the bathroom floor and in the room below as best as possible. He also put a tray in place to direct any further drips from the tap into the bath itself so that in the event that the tap was not left on but is actually faulty, the water would not leak onto the floor.

The client was not due back home for at least another three weeks so it is fortunate that the intruder alarm was activated due to high levels of condensation in the room below following the leak. Had the alarm not been activated, then it is unlikely that the leak would have been identified for another three weeks. This could have led to significant structural damage to the property and a hefty repair bills too. Even if the owner had been alerted to the leak, the cost of an out-of-hours plumber to resolve any easily fixable leak would likely have been far greater than the cost of our callout at just £37.50.

Find out more about our alarm response and key holding services here or get in touch with us to discuss your requirements. We can attend both residential and commercial premises and our team of security operatives will be on hand for any eventuality including intrusions, break-ins and even unexpected leaks!

Prepare for winter with Key Holding from £1 per day

Wye Security Solutions are a family-run business, based in the beautiful Wye Valley area of Monmouthshire.

The community is at the heart of what we do, as not only do we work with both residential and commercial clients, but we have also supported voluntary projects for the local council and the mayor with our services in addition to helping good causes through regular charitable donations.